I dropped by the Computer History Museum today 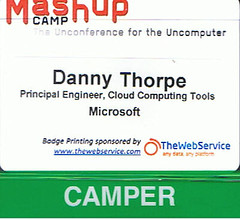 to check out this year’s Mashup Camp and see what’s hot and what’s not.  Turnout was good, about the same as what I remember at Mashup Camp in 2006 (or was it 2007?) – roughly 150 people milling about.

Today was pretty much sponsor’s day – the speedgeeking and chalk talk presenters all appeared to be sponsoring the event in some way.  I discovered a few new things interesting enough to dig into further, but I’m really hoping tomorrow will get back to the “directed anarchy” that un-conferences are famous for.  No session tracks, no agendas, just time slots and rooms and a whiteboard (or wiki) where the conference attendees can nominate and vote for discussion topics they’d like to learn more about.  If there’s sufficient interest and sufficient expertise in the audience to cover the topic, then poof! you have a session.

The discovery of the day for me was Calais, a content digesting and tagging web service offered by Thompson Reuters (the news service people) that brings a smack of semantic web to the content you throw at it.  Given a news article to digest, Calais can identify all the people named in the article, as well as places and market segment key concepts. Calais can also do a fair bit of semantic disambiguation, figuring out that the John Doe in this article is probably the John Doe that is CEO of the company also mentioned in the article.

I need to dig into Calais’ web service API and tinker with it a bit. It sounds very interesting.

The yawner for the day was the Google chalk talk, delivered by a developer evangelist from Google ground zero just down the street. He was showing APIs to integrate Google Earth into Google Maps. Showing stuff on a map has become the cliche of mashups, so if you’re going to demo something with a map (especially to the mashup community) you’d better make it jaw-droppingly fantastic.  Sorry, but adding Google Earth APIs to Google Maps didn’t do it for me.

To make matters worse, the presenter had to talk his way around a number of technical difficulties, including (but not limited to):

All of that in 25 minutes. It’s a reassuring to know that even Google can have “those” kinds of demo days.

The seizure-inducing flicker in the Singapore library app was probably due to having faces in the model with no texture defined.  The presenter apologized for the flicker, mentioning that the app developer(s) had some “problems” with their 3d models.  Ok, fair enough, but why on Google Earth would you put that crap up on the big screen?  The concept of showing a 3D map of a library maze wasn’t impressive enough to overcome the presentation flaws.