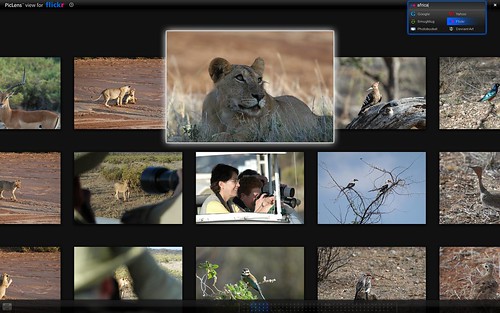 While zooming around in images on the 3D wall, hit Tab to select the Search box in the top right corner of the screen (or mouse click on it).  You’ll see the traditional vertical bar edit insertion caret / cursor ready for input as well as half a dozen search engines listed below the search box: Google Image Search, Yahoo Image Search, Flickr, DeviantArt, PhotoBucket, and SmugMug.

This makes it pretty darn easy to flip between search engines to see how the same terms can return vastly different image results.  Google image search will give you very literal results – generally photos of large squids laid out on the pier or parking lot.  DeviantArt or Flickr, on the other hand, are much more likely to return more artistic images, paintings, or face shots of a guy named “Squid”.  Let us know if this sort of search domain-hopping is useful to you.

In addition to text editing, this week’s PicLens release has several new features:

We’ve stepped up the size of thumbnail images we ask for from Flickr.  This results in much sharper images in the wall, but the cost is it takes longer to downoad them.  Let us know what you think of this (in comments on this blog or in email to feedback (at) piclens.com) – is it too slow for you, or is it the right thing to do for best picture quality?  It definitely looks great.

One of the drawbacks to the early uses of RSS was that RSS was never intended to be a permenant record or to contain endless amounts of data.  It’s a simple file format.  If you put a lot of data into an RSS feed, everybody has to download the entire RSS feed to see any of it.  Blogs deal with this by “aging” the items in the RSS feed – old items are removed from the end when new items are pushed onto the front.  Archives are broken down by month, so that each archive RSS feed doesn’t get too big to handle.

This doesn’t work so well for huge image databases like Flickr or DeviantArt.  Flickr actually does provide an RSS feed of a user’s photo stream, but it is restricted to the 20 most recent items.  20 is a lot for a web page, but it’s a drop in the ocean for PicLens.

Austin was poking around in RSS for some other PicLens work when he stumbled upon a bit of esoterica that got him really excited.  Not the photos returned by a particularly curvy search query (though those do excite him as well), but a technique to encode a reference to previous and next pages of an RSS feed in the RSS feed.  Essentially, you can make a really big RSS feed out of a linked list of smaller, more manageable RSS feed chunks.  This is a great solution to the problem of managing large amounts of data in bite sized chunks that can be loaded only when needed.

PicLens Publisher would be a natural to emit multipage RSS.  We will certainly bring up multipage RSS as a site suggestion when chatting with big sites like Yahoo, Flickr, DeviantArt and others.

An eleventh hour addition to this PicLens 1.6.1 release is the ability to view galleries generated by PicLens Publisher on your local hard disk.  In Firefox, just do File: Open File and select the gallery.html file from the directory created by PicLens Publisher.  Viola! You can preview how your gallery will look in PicLens before uploading the files to your web server.

There are some additional angles on this feature but we’re still fine tuning it so I’ll save that for another day.  Besides, if I spill all the beans at once, where’s the air of mystery and adventure in that?  ;>