I figured out why I hadn’t been able to find Nikhil in the speakers lounge to chat about client-side web app bits – he wasn’t in Barcelona!  He had to cancel due to illness (he’s much better now).  Jeff Prosise graciously offered to cover Nikhil’s TechEd talks.

After the conference day was done, the Dutch contingent convened on the little Dutch bar right outside Yme’s Park Hotel (what a coincidence!).  Yme introduced me to several more bot authors, this time for banks and IT applications.  The three amigos caught up with us for a toast.  Frans-Willem feigned protest about my earlier remarks concerning his photo aversion.  So I shot him anyway: 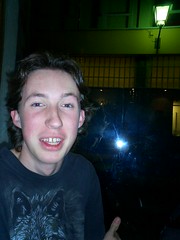 I then must have had a seizure or something, for I violated the photographer’s first rule of engagement:  Never relinquish control of your camera.

FW oh so smoothly asked to see the shot of him, so I handed him the camera.  In less than a second he figured out how to switch the camera from review to snapshot mode, and turned it on me. 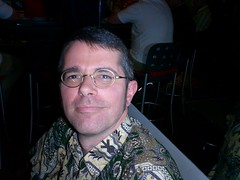 I think it’s time to rub what remains of the labels off the camera controls.

The TechEd Barcelona staff hosted a very nice dinner for the speakers Friday night.  I bumped into Mr ASP Matt (Smith?) who I’d met at Singapore ReMix in July, and Brad Abrams.  Many .NETish and ASPish and Webish topics surfaced during dinner, but out of consideration for the spouses we tried to occasionally talk like normal people too.

I had a nice chat with Brian Long in the hotel lobby after dinner.  He actually seemed intrigued and perhaps even enthused about all this web stuff people were talking about.  Well, as enthused as a good Brit will allow.  ;>

I stopped off in England for a day of meetings on the way back to California.  Not knowing quite where I was going or how far the place was from Heathrow (where’s the adventure in knowing?), I opted to take the trains, following the sole line of guidance in the meeting notes:  “Train to Basingstoke from Waterloo”.  Actually, I had attempted to plot an itinerary with online guides prior to leaving Barcelona, but I couldn’t make heads or tails of Britain’s “multi-faceted” multi-vendor rail system in the 15 minutes before the flight began boarding.  You can get all the timetables you could ever want to get from Heathrow to London, or from Waterloo to Basingstoke, but Heathrow to Basingstoke?  Forget it.  Can’t get there from here.  So, I winged it.  Heathrow Express into Paddington, The Tube to Waterloo, and then Southwest Rail to Basingstoke.

But that’s not the story.  As I was boarding the Basingstoke train at Waterloo, an announcement came over the PA that due to an accident on the tracks, this train would not be stopping at Wimbledon.  All Wimbledon passengers please detrain immediately.

The train eventually pulled away from the platform and Wimbledon travelers.  Shortly afterward, the conductor announced on the PA “This 12 car train will separate at nnn station” (I forget which station) “the front 8 cars will go to Basingstoke and beyond.  The rear 4 cars will go to ” somewhere else.

“Passengers traveling to Basingstoke, please move to the front 8 cars of this train.”

Now that struck my funny bone.  Here we are, sitting somewhere on a 12 car train.  Which car are we in?  How do we know if we’re in the front 8 or the back 4?  There’s nothing in the train car to indicate it’s cardinality.

Well, almost.  There was an LED display in the ceiling at the center of the car that scrolled helpful messages that more or less directly contradicted what was being said on the PA.  The PA said “Basingstoke passengers, please move forward.”  The display said “This train is going to Basingstoke.”  Now, was the display referring to the entire train in general, or to this car specifically?  Every now and then the display would say something that seemed specific, but then it would fall back to generalities.  I was beginning to understand the source of Douglas Adams’ genius.

There were several types of Basingstoke passengers on board:  those who were completely confused but too composed to admit it, those who knew what they were doing and boarded the front 8 cars to begin with, and those who just moved themselves 4 cars forward.  I wasn’t any of those.  (I didn’t think of the 4 cars forward solution until I started to write this account)  I found my solution when the conductor announced that the next stop was a short platform, and that passengers could only detrain by the first 8 cars.  Aha!  If there’s no platform outside my window, I’m in the last 4 cars of the train and I need to move.  Finally, a frame of reference.

While all this relativistic juggling of passengers and cars was going on, they apparently cleared the accident on the tracks.  The train stopped as scheduled at Wimbledon.  Two rather smug looking little old ladies disembarked, headed for the car park.

This post was originally published on my MSDN blog while I was at Microsoft.