Ok, so I’m running out of clever headlines.

Nikhil Kothari‘s AJAX scripting talk was filled to the brim, so I headed over to Steve Teixeira‘s C++ roadmap session.  In transit, I crossed paths with the three Dutch amigos (who took me trekking across downtown Barcelona last night in search of beer and dinner) who were also headed in the Nikhil direction.  I informed them the room was full and dragged them to Steve’s session instead.

I received an IM contact invite from “public void delegate Inky()@…” the other day. Guess who?

No photo for amigo #3, Frans-Wilhelm, yet. Threats of bodily harm pop up whenever he sees a camera. 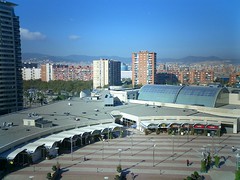 This post was originally published on my MSDN blog while I was at Microsoft.